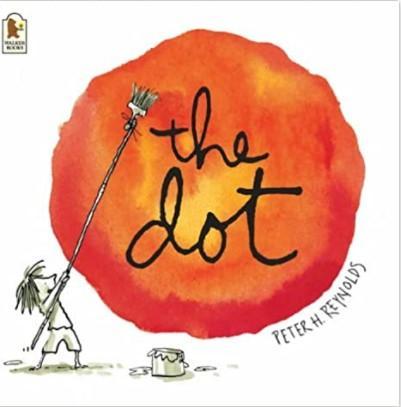 One day, Henri Matisse (1869-1954) cut a small bird out of a piece of white paper. It was a simple shape, but he liked the way it looked and didn't want to throw it away, so he pinned it to the wall of his room. But the bird looked lonely all by itself, so he cut out more shapes to join it, and before he knew it, he had transformed his walls into larger-than-life gardens filled with brightly coloured plants and animals and shapes of all sizes.

Vashti thinks she can’t draw. But her teacher is sure that she can. She knows that there’s creative spirit in everyone, and encourages Vashti to sign the angry dot she makes in frustration on a piece of paper. This act makes Vashti look at herself a little differently, and helps her discover that where there’s a dot there’s a way…

Camille and the Sunflowers

One day a strange man arrives in Camille's town. He has a straw hat and a yellow beard. The man turns out to be the artist Vincent van Gogh. This is an introduction to the great painter, seen through the eyes of a young boy entranced by his painting.

Vasya Kandinsky was a proper little boy: he studied Maths and History, he practiced the piano, he sat up straight and was perfectly polite. When his family sent him to art classes, they expected him to paint pretty houses and flowers, like a proper artist.

But as Vasya opened his paint box and began mixing the reds, the yellows, the blues, he heard a strange sound, the swirling colours trilled like an orchestra tuning up for a symphony!

Linnea has been in Paris and she has visited the painter Claude Monet's garden! She even stood on the same little Japanese bridge that Monet painted so often in his pictures. In Paris, Linnea got to see many of the real paintings. Now she can understand what it means to be called an Impressionist, and she knows a lot about Monet's life in the pink house where he lived.